Our customer is a prominent tier-2 supplier of electronics and mechanical systems for various industries, automotive being the most crucial one.

These parameters may be related to how data is communicated, kind of seed-key algorithms in place and various other aspects. Developing a VW specific bootloader over UDS from ground-zero would mean at least 6 months of development time which would reduce the time-to-market further. A ready-to-deploy UDS software was the first requisite for this bootloader to work.

Upon learning about our flash bootloader development capabilities and the prior customers that we delivered our bootloader to, the customer came on-board.

Our task was to provide a complete solution to enable ECU reprogramming. Since the ECU was intended for VW, the flash bootloader software had to be developed as per the OEM specifications. The bootloader development also brought about the need for a UDS protocol software and a PC based ECU-reprogramming tool along with the low-level drivers for the Microcontroller unit on which the Bootloader will run. 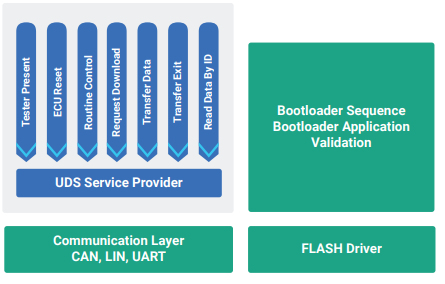 Our final deliverables to the customer were:

Bootloader Development: Bootloader software was developed as per the OEM specifications which in this case was Volkswagen. Since we had worked on a somewhat similar Bootloader project before, we had the basic bootloader framework and architecture ready.

50-60% of effort was saved since we had platform software ready for the microcontroller platform that our customer intended to use for their project. The ready-to-deploy UDS stack and Bootloader framework also contributed to faster time-to-market for the solution.

Vector Hardware Interface: Acts as an interface between the PC based software and embedded hardware

CAPL Script: A scripting language used to access CAN protocol for simulation purposes