The idea of remote diagnostics of a vehicle sounds very exciting. And so does the convenience of updating a car’s software without visiting the garage. It seems like a win-win for the car users as well as the OEMs and service centers. However, it is important to be aware of the security risks that can wreak havoc once a cyberattack cripples the car electronics system and steals valuable data. Especially, when external TCP/IP protocols are involved, securing the network becomes an uphill task. But should that mean an end to remote diagnostics and Firmware over the air (FOTA) upgrade? Absolutely no!

Cybersecurity comes across as a cornerstone that boosts consumer confidence on advanced technologies such as V2X, V2V, autonomous driving and more.

Thanks to the automotive cybersecurity standards such as ISO 21434, there are clear guidelines and best practices to secure the vehicle network. Among various technologies and security layers, Transport Layer Security (TLS) stands out, especially when protocols such as DoIP are involved. This is because DoIP uses Transport layer to communicate to ECUs and naturally, Transport Layer Security module is the best fit, almost like ‘made for each other’.

We, at Embitel have been delivering solutions around cybersecurity to many of our customers. From secure bootloaders to secured DoIP protocols using TLS, cybersecurity has been at the crux of our innovations.

What is Transport Layer Security?

Transport Layer Security is a shield to secure the Transport Layer of a communication protocol such as DoIP (ISO 13400). TLS protects the data from being stolen or modified when it is being transmitted from a server to client or vice-versa. TLS can be seen as an implementation of cybersecurity protocol. It is essentially a high-level cybersecurity protocol under which there are protocols for specific requirements. The beauty of a TLS module is that it can be easily tailored to the specific requirements of a project.

Similarly, the record protocol ensures the confidentiality and the integrity of the data to be transmitted between the entities. It makes use of symmetric cryptography to achieve that. 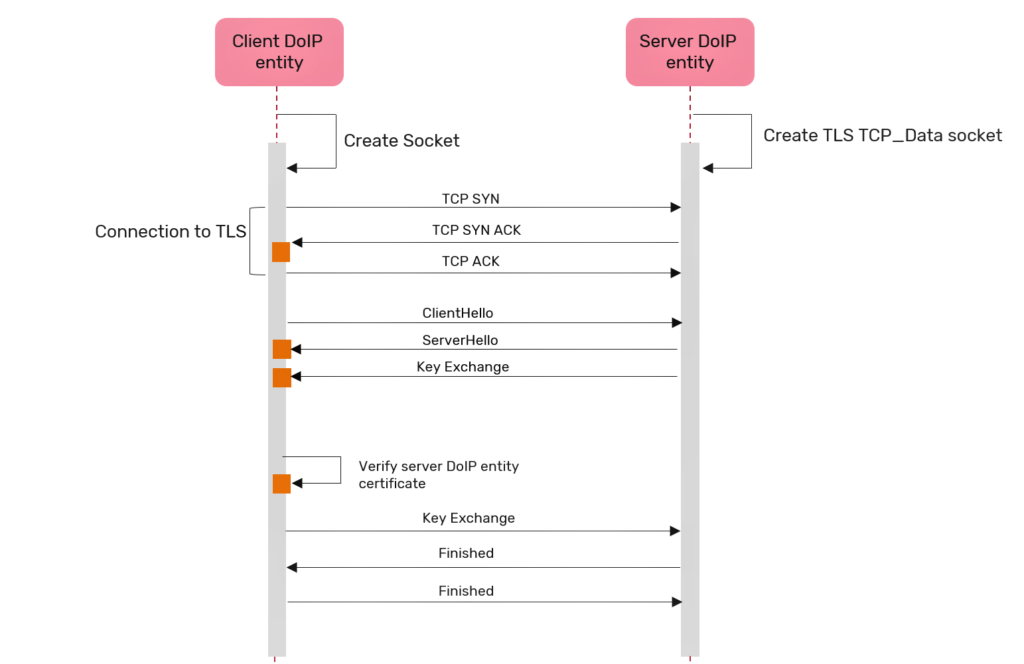 At the core of Transport Layer Security module are cipher suites. These are nothing but algorithms that help secure the connection.

TLS module works as a standalone module which can be appended with any kind of TCP/IP communication irrespective of the upper application layer.

Whether it is remote vehicle diagnostics using DoIP as the transport protocol and UDS as the application layer or a FOTA application, TLS can be readily used to secure the communication.

Implementation of TLS in Remote Vehicle Diagnostics Powered by DoIP

DoIP stands for Diagnostics over Internet Protocol, a de facto standard for remote vehicle diagnostics used across OEMs. Since, it uses TCP for communication, TLS proves to be the perfect fit for securing the connection between the client DoIP entity and server DoIP entity.

TLS helps in establishing a secure connection which is both:

TLS protocol is implemented by the secure diagnostic communication for the transport channel between DoIP server and client. Prior to exchanging DoIP messages, a secure TCP connection is negotiated using TLS handshake protocol. The server and the client entity exchange versions of TLS protocol, decide the common cipher suite, verify certificates and complete the session key exchange.

TLS Equipped FOTA: We have our IoT team also working parallelly on cybersecurity aspect of telematics and general FOTA applications. We can implement TLS module for such IoT applications as well.

Applications like ADAS, Telematics, Body Control Modules require flash Bootloaders for timely ECU re-programming. Since many of these applications use OTA upgrades, the bootloader must be equipped with security features such as Digital Signature, Encryption, Hardware Security Module, and others. We understood the requirements from our customers and started to work on various algorithms to be used for a secure bootloader.

Automotive cybersecurity using Transport Layer Security module is getting wide-spread acceptability. Connect with us to implement TLS module within your automotive projects related to remote vehicle diagnostics, telematics and FOTA.