What’s Below the Hood of an Electric Two-Wheeler? A Sneak Peek of the Architecture and Electronic Control Units

What’s Below the Hood of an Electric Two-Wheeler? A Sneak Peek of the Architecture and Electronic Control Units

In the Automotive Industry, the Electric Avatar of two-wheelers has also started taking the center stage.

As the roads of the Global Cities are becoming busier by the day, an Electric Two Wheeler promises to be a more eco-friendly, sustainable and feasible option for local commute.

To live up to this promise and meet the expectations of digital savvy city commuters, many OEMs’ are supporting Android Infotainment and Telematics related features in Electric Two Wheelers.

In comparison to Electric Cars, though the complexities are drastically different but the common technology thread between them is a humble electronic component known as an Electronic Control Unit.

The Electronic Control Units have made the cars smarter over the years and are facilitating the two-wheelers to become Smart as well.

Several features, widely integrated in four wheelers, are now being made available in two–wheelers as well. These features include engine immobilizers, ABS, Anti-theft alarm and what not! However, as we are focusing on only the electric two-wheelers in the blog, we will stick to a few particular vehicle ECUs critical for the design of an Electric Two-Wheeler.

Since the hardware and software challenges related to two-wheeler architecture design are quite different from that of four wheelers. The in-depth understanding of Control Units and Motor Control Systems becomes an interesting prospect for a budding Automotive Engineer!

However, before we jump to different control systems and their role, here’s a little prelude – we will explore the two possible architecture designs for a networks of ECUs’ in an electric two-wheeler.

Vehicle ECUs are small computers in themselves which are essential in supporting various product features.

Based on the business objectives and other technical considerations, one can design a system architecture either with single ECU or one with multiple units. We will discuss details of both these designs.

Typically, in a single ECU scenario, there is a central Body Control Unit that does all the hard work. It is directly connected to various sensors, collects the required information from sensors and CAN network, does the processing and implements necessary action. This works best when there are not too many sensors are integrated in your product design.

The algorithms required to process the vehicle parameters are ported in the processor of this central control unit. The central Body Control Module (BCM) is connected to sensors through the harness (wires). Functions like DC to DC conversion, drivetrain, lamp load etc. are handled by the main unit.

The following diagram will help you understand the system better. 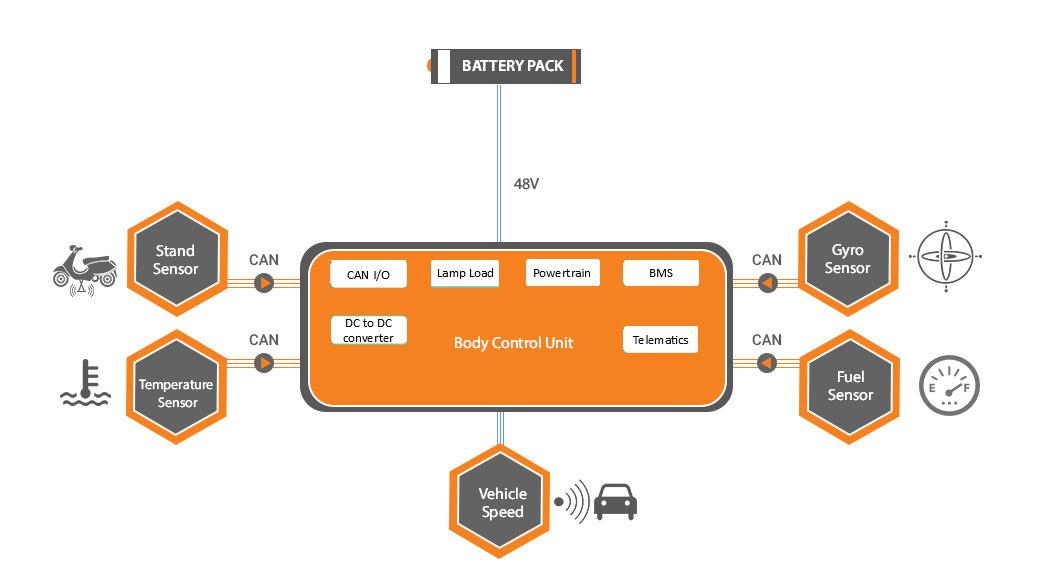 Pros and Cons of such a system:

Having a more decentralized architecture, this system has multiple ECUs which are tasked to manage different functions. However, each of them is interfaced with the main control unit, called the body control module.

So there is a separate control unit for powertrain motor control system, CAN input/output, headlight, infotainment system and so on. These ECUs are connected to the respective sensors in order to fetch the required information.

For instance, the infotainment ECU will fetch the wheel speed, engine speed etc. and display them on the screen. Another ECU may read the level of the fuel in the tank and calculate the distance-to-empty using an algorithm.

The blog diagram will make it easier to comprehend. 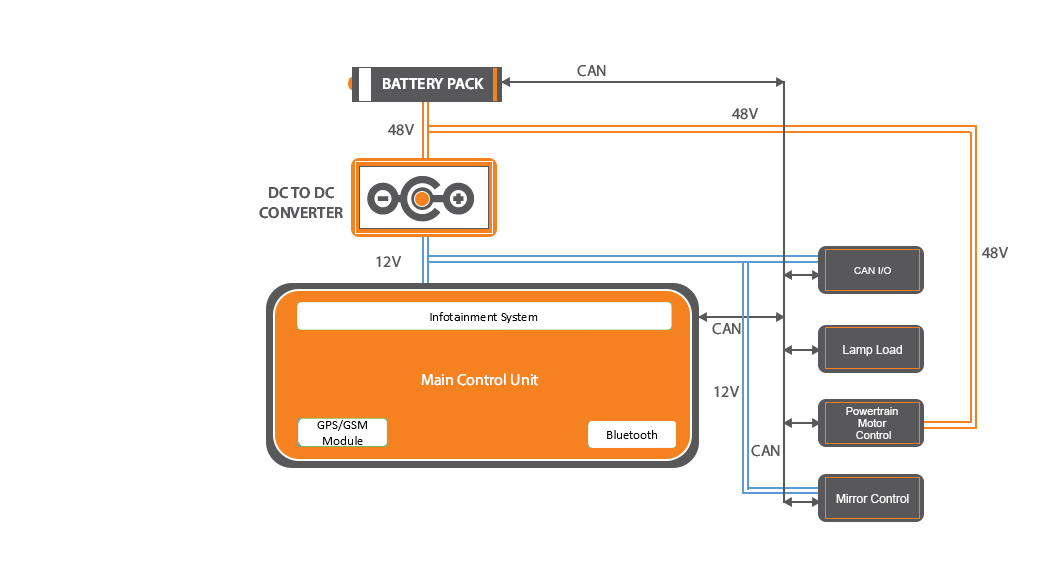 A separate control unit for different functions helps in de-cluttering the entire system. However, there may be a few downsides too. Let’s examine both!

All said and done, multiple ECUs would still be recommended if you are building a futuristic, feature-rich electric two-wheeler that’s not just efficient but also smart and intuitive.

Now that we know about both the centralized ECU system as well as the multiple ECUs scenario, it’s time to learn about different ECUs at work in an electric two–wheeler.

In the future, we may see more automotive ECUs making your electric two- wheeler, a powerhouse of amazing features and at the same time, safe and efficient. Watch for this space for more such blogs on innovations in electric two-wheelers.