Electronic Control Unit is at the Core of All Automotive Innovations: Know How the Story Unfolded

Electronic Control Unit is at the Core of All Automotive Innovations: Know How the Story Unfolded

The era of electronics started with the invention of semiconductor devices, MOSFETs and evolved into more complex systems such as Electronics control unit. It was around the year 1978, when General Motors introduced the first ever electronics system in an automobile. And the rest as they say is history.

An ECU is essentially an embedded system that is built on an automotive-grade microcontroller. Along with automotive software and communication protocols, an ECU is able to control the electrical systems and sub-systems in a vehicle. More advanced ECUs also communicate to the cloud and even other vehicles and infrastructures using V2V and V2X technologies. When control units were first introduced, they were responsible to control different actuators of an IC engine. It was hence called Engine Control Unit. Over time, the term ECU assumed the meaning of electronic control unit as it evolved into an electronic system that could control powertrain, transmission, brakes, seats and what not.

Understanding the Functional Difference between Mechanical and Electronics based control units: 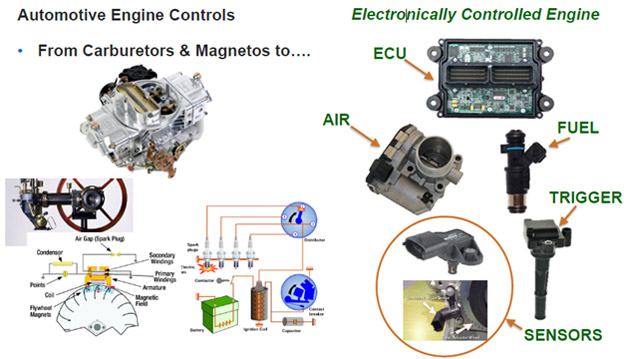 Modern vehicles have various ECUs dedicated to a series of tasks. For instance, a body control module is responsible for power distribution to enable it to control the body functions such as automotive lighting, door, windows, security access etc. If we try to put the automotive ECUs in categories, we can divide them into:

Again, such categorizations are not absolute and depend mostly on OEMs. To understand the ECUs better, let us consider the body control module and how it controls the automotive lighting.

Now, let us consider an example of engine control unit.

In modern vehicles, the basic working principle of engine operation is still based on combustion, only difference is that the process is now controlled by the ECU.

The engine ECU controls the opening and closing of the input/output valve, by taking input from the accelerator of pedal of the vehicle.

The engine ECU is also responsible for the clockwork of the amount of fuel injection and spark ignition.

In this way, the Engine ECU results in accurate synchronization, rendering more power, efficiency and highly functional engines, to the vehicles.

In this way, ECU controlled vehicles are able to deliver higher efficiency as compared to mechanical automobiles.

Factors that led the Automotive OEMs’ to move from Mechanical to Electronic Control Units:

The paradigm shift of Automobiles from a mechanical machine to electronic system has paved the way for innovations like power steering, cruise control, infotainment, HUD, in-car connectivity and mobility.

In modern connected cars, Automotive ECUs along with LiDAR sensor technology are eventually making a self-driving autonomous car a reality.

So while in the hindsight, it is a no-brainer to conclude that the electronics in automotive has indeed led to favourable results. 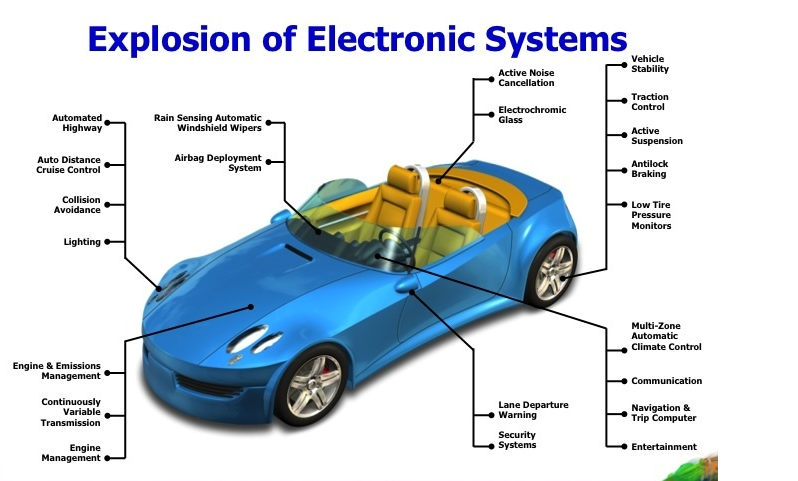 Mitigation of driver distraction to ensure safety for both drivers and pedestrians has always been the top priority for Automotive OEMs’ and Government Regulators.

Some of the OEMs’ like Volvo have also officially announced their ambitions to reduce the fatality rate due to vehicles to zero by 2020.

The automotive OEMs’ and Suppliers are able to walk the talk due to the capabilities of the electronics based control units within the vehicle.

This has been one of the major driving factors as any compromise with safety would have direct impact on the very existence of automobiles as the mode of transport.

As an Automotive OEM and /or a Supplier, it is mandatory to comply with such region specific regulations and norms pertaining to emissions, energy consumption, safety and emergency responses and more

Implementing such mandates without the use of Electronic Control Units and software algorithms would have been a mission impossible.

On the other end, due to emergence of electronic based automation and connectivity with road infrastructure, the regulators are also able to keep the malpractices in check and respond in a better way, to emergency situations.

For an instance, to keep in check the frequency of road accidents due to fleet trucks and also to ensure adherence to the HOS (hours of service) policy, the U.S. Federal Motor Carrier Safety Administration (FMCSA) has issued an ELD mandate.

All the fleet companies have to comply with the mandate by December 2017 by installing Electronic Logging Device (ELD) in their trucks.

In the last decade, since the advent of mobile phones, it became pertinent for car-makers to introduce connectivity and more electronics within the car

The generation obsessed with smart devices, web connectivity, ease of navigation, social media and consumption of information on the go, meant that car had to slowly transform into a consumer electronics device.

Global OEMs’ and Suppliers have been able to respond to such a change in customer preference by allowing the explosion of electronics to bolster in-car mobility and connectivity.

These along with Telematics applications have opened up a Pandora box of new revenue opportunities for OEMs’, through value-add after-sales service and remote diagnostics and maintenance support

Automotive Electronics timeline: The journey from Cadillac to Tesla 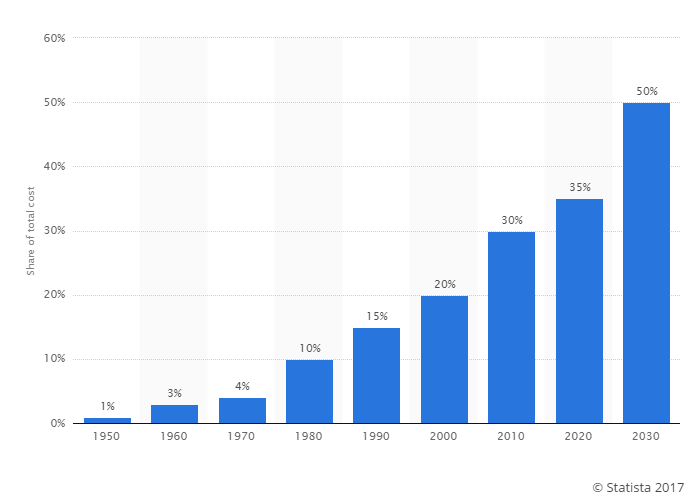 Numbers speak louder than words! And this graph (by ‘statista) does all the justice to the influence of electronics in Automotive.

It also offers a lot of insights regarding the journey of automotive electronics from 1950 to 2030.

What we see here is the cost share of automotive ECU with respect to the overall cost of the car from 1950 to 2030.

From the graph above, it is very evident that the presence of electronics in cars did not grow overnight.

It took 3 decades of technology innovations, persistent R&D in automotive product development along with other driving factors, when finally electronics contributed 10% to overall cost in 1980s’.

To be more specific the introduction of Airbags Control Unit in 1970s and the demand for fuel efficient cars, also contributed to the rapid growth of electronics during 1970-1980

1990-2010 can be considered as the best growth years for automotive electronics.

With advanced technologies like LiDAR sensor based self-driving cars, Land Rover’s Invisible Car and Toyota’s Hovering car, it is anticipated that, by 2030 Automotive electronics will contribute 50% of the total car cost

It is no brainer that Automotive Electronics is having a dream-run in recent years.

And the way this story has unfolded, all this seems destined to happen not only for better driving experience but also for the safer roads of the world!