Made in China 2025: Is China Driving the Global Electric Vehicle Market? A Detailed Insight

Made in China 2025: Is China Driving the Global Electric Vehicle Market? A Detailed Insight

There will be a high probability that your future Electric Vehicle purchase will be from a China based OEM.

Why are we saying that? Because the China’s Electric vehicle market has surpassed US market in terms of production.

China is all geared up to dominate the world-wide sales of Electric Vehicles. Sample these- Last year, 35% of the electric cars sold worldwide since 2011, was in China. In the domestic market alone, China sold almost 1 million electric cars. 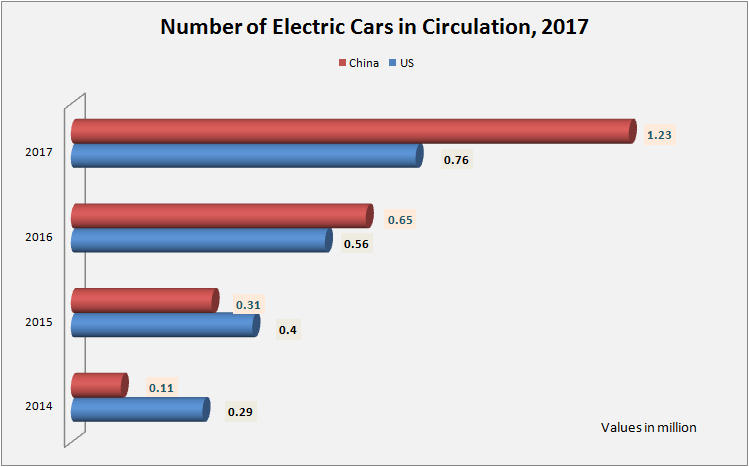 Image source: International Energy Agency
In China, it is not just the private transport, but even the public transport is fully embracing Electric Vehicles.

Shenzhen, a city in China has a fleet of 16000 buses and all of them are Electric. Their fleet of taxi is also completely electric.

According to one research, the CAGR of the EV market of China will be at 46% by the year 2020. This growth rate will bring the number of EVs to 2.5 million. This is more that the government’s goal of 2 million EVs’.

There are a number of factors at play, which are promoting such steadfast growth of Electric Vehicles. We shall discuss all of them in the following section.

What is Fueling the Rapid Rise of Electric Vehicles in China?

Considering the environmental impacts of the combustion vehicles Electric Vehicles, the world over, has been seen as a greener alternative. However, China seems to have been most responsive to this much needed change.

Both the demand and supply has seen a steady increase. Also, achieving growth in electric vehicle space is one of the 10 key areas identified in the “Made in China 2025” industrial strategy.

The Curious Case of EV Start-ups and Their Impact

Apart from some big names in the Chinese Electric Vehicle market, there are innumerable number of EV startups that have joined the bandwagon.

Till last year, China had 487 EV startups. Some of these startups like Xpeng Motor Technology has backing from the big league players like Alibaba, Xiaomi and many others.

Another EV OEM in China called NIO has started producing an electric crossover. Also, a company called Byton has a SUV in production with a big screen that covers the entire dash.

However, China may confront the problem of ‘too many’ in the future.  If due to the overutilization of the EV production capacity, any slump in demand may lead to teething issues created by demand-supply mismatch.

However, that is not the current concern. China wants to be a high-tech power and supporting the innovation takes the precedence.

Also, the kind of EV production volumes and sales numbers China is targeting, these startups will definitely play a critical role. However, the onus to maintain the quality despite the increase in quantity is also on these startups.

Electric vehicle sector is one of the key areas identified for the China 2025 strategy.

The country wants the EVs to represent more than 40% of the total auto sales by the year 2025. This has a lot to do with pollution and also to become a technology superpower in the world.

Here are some of the Highlights of China’s Electric Vehicle Plan 2025:

As mentioned before, for over a decade, the Chinese government has been incentivized buying and manufacturing of the electric vehicles. The strategy has been a success; and the numbers are the proof.

Taking a step further, the Chinese government has now introduced a new rule for the car manufacturers.

The new rule says that no new automotive companies can be established in China if they do not produce electric vehicles.

Strict conditions will also be imposed on existing OEMs that plans to setup a car factory that doesn’t manufacture vehicles running on the green energy.

Why is the Future of EVs Linked to China?

Once touted as the biggest electric vehicle manufacturer, Tesla’s journey has been no less than a chaos.

Hence, the tide of expectation has taken a turn and Beijing is being perceived as the focal point of the Global EV growth, as of now.

Then there is a recent mandate of the government that makes it compulsory for the OEMs to produce a sizeable number of Electric Vehicle along with regular IC engine automobiles.

Big brands like BMS, and Volkswagen have already announced their new energy vehicle models to be developed in China.

All these facts tell the same story – China is definitely leading the world to a future that is driven by Electric Vehicles.

So yes, if you plan to buy an electric car in near future, there is huge chance that it would carry the famous tag of ‘Made of China’.