Ever Wondered How a 360 Degree View Car Camera Works? Here’s How

Ever Wondered How a 360 Degree View Car Camera Works? Here’s How

With the evolution of automotive technology, Advanced Driver Assistance Systems (ADAS) have become mainstream. The suite of electronic gadgetry that constitutes ADAS is highly impressive in its capabilities and sophistication.

ADAS offers solutions for pedestrian avoidance, traffic sign recognition, lane departure warning, blind spot detection, and much more. Today, one of the striking applications of ADAS is the 360 degree view car camera – a swanky new piece of car tech that can easily turn you into a driving and parking pro!

Many of us would have seen this technology in action in the latest models of cars. For those who haven’t, here are the details.

What is a 360 Degree View Car Camera?

Also referred to as a Bird’s Eye View Car Camera or Surround View Camera System, the 360 Degree View Car Camera is a collection of devices that work together to provide the driver a real-time view of the surroundings of the car. This view is projected directly onto the dashboard hardware, usually the infotainment system.

The surround view camera system software displays the vehicle and its surroundings so that it looks like the car is being filmed by a drone from directly above. The image screen is also split to display the vehicle’s top view on one side of the screen and the front/rear/side view on the other. 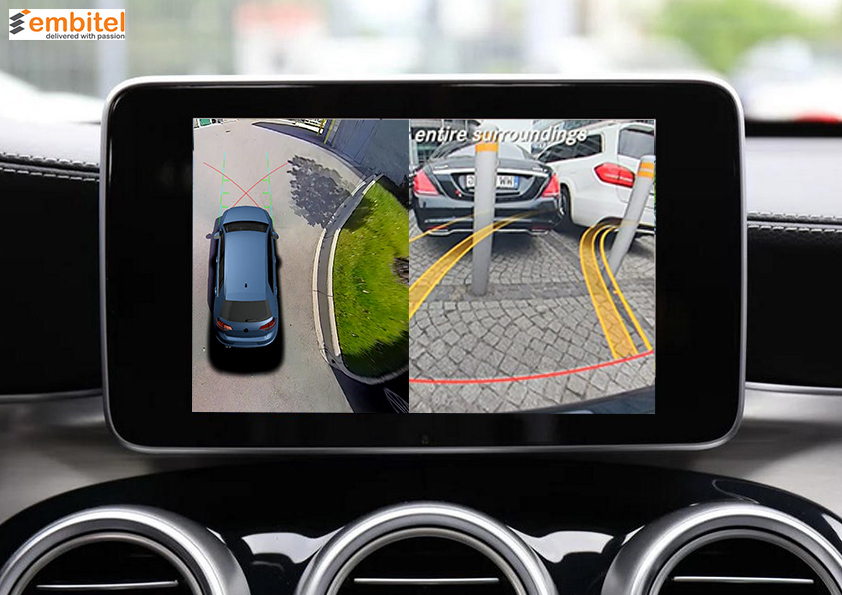 One of the biggest advantages of this system is the ease with which drivers can navigate the vehicle into a parking slot, while avoiding contact with nearby obstacles in an astute manner.

While this may seem like wizardry to the uninitiated, in reality, it is just the output of a set of camera sensors and image processors, enhanced with a sprinkling of data science!

The 360 degree view car camera system is a synergy of hardware and software that work together and display information related to vehicle surroundings on the infotainment screen. The individual components of this system are as follows: 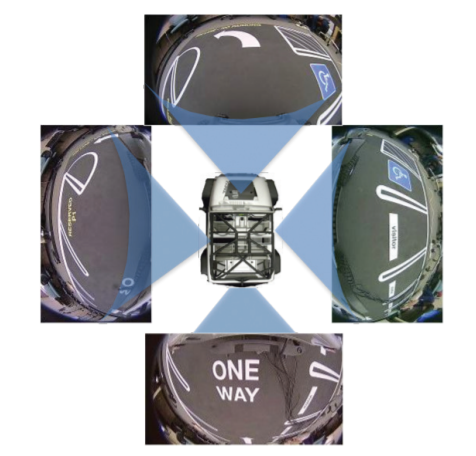 How Does the Image Processor Create Coherent Composite Images?

The image stitching process is usually divided into the following activities:

While developing a 360 degree view car camera system, an important design decision is the placement of cameras. It is crucial that the cameras can view the vehicle perimeters clearly. They should also not disrupt the aesthetics of the vehicle or any other functionality. Hence, system designers spend a good amount of time in simulating CAD models of the vehicle to analyse the field of view and blind zones from different angles. This activity is done in multiple vehicle load configurations.

Another aspect to be considered is the process of camera calibration. No two cameras produce the exact same output. If two cameras are mounted at the exact same location, they will still create images that differ slightly. The placement of lens, aging, thermal expansion, etc. are factors that bring about these differences in the camera images. Hence, it is important to perform camera calibration to compensate for these mismatches.

If camera calibration is not executed properly, there could be issues like non-aligned output images and faulty colours. Intrinsic and extrinsic calibration of cameras is crucial for optimum performance of the surround view camera system.

It is also important to design the bird’s eye view car camera system so that it is easy to operate, install and maintain.

360 degree view car camera systems will be an integral part of autonomous vehicles. Today, this technology is not restricted to luxury vehicle models.  As motor vehicle regulations around the world evolve to include more safety-related guidelines, ADAS applications such as these will see a significant growth.