Android is undoubtedly one of the most successful Linux based operating systems in the world.

Although it gained prominence with its implementation in smart phones and later in wearables, porting of Android OS in embedded systems has also recently garnered a lot of attention.

Starting with consumer electronics like set-top boxes, smart televisions and gaming consoles, porting of Android is also very popular fo the automotive and IoT applications like Infotainment, HUD and likes.

One of the most striking advantages of porting Android OS to the embedded platforms is the compatibility of developed applications for one platform across different platforms with minimum tweaking.

As we move forward, we will discuss more such advantages and how to go about porting Android to the embedded systems.

What is Meant by Android OS Porting? 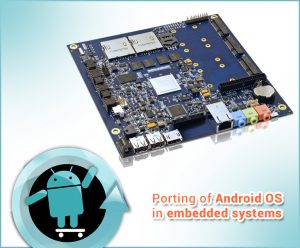 OS porting in its general terms refers to the modification of the operating system to make it suitable to run on a different hardware architecture than the OS is intended for.

For instance, if a Linux OS is designed to originally run on a personal computer based on Intel X86 or X64 architecture but business-use requires it to be loaded to an embedded system, some changes in the Linux OS is mandatory.

This set of changes is called OS Porting and when the operating system to be ported is Android, the process becomes Android Porting.

Android OS runs on a Linux Kernel and its development and testing have been performed on various ARM platforms. Therefore, porting Android to an ARM-based embedded system does not require many changes.

Since, Android OS also finds its implementation in Automotive industry, porting Android to I.MX6 (a widely used hardware platform in multimedia applications) is also quite prevalent these days. Such porting will also require BSP (Board Support Package) customization.

BSP is beyond the scope of the blog and will be discussed in more detail in upcoming blogs.

P.S: In a nutshell, a BSP is an interface that enables the communication between the OS kernel and the hardware assets like microcontroller etc.

Best Practices for Porting of Android to the embedded platforms

As Android stack is built on top of a Linux Kernel, Android porting starts with the porting of the kernel and then the Android Stack.

However, before the actual porting is executed, following are some of the best practices one can follow to ensure efficient and successful Android porting.

Although Android was built keeping mobile phones in mind, its potential as a preferred OS for embedded system is quite evident.

Consumer electronics, automotive and IoT are some of the industries that are readily embracing Android.

It is important that the product engineering services companies and the embedded system developers must develop relevant expertise and experience to effectively partner with customers for successful Android porting projects.