While talking about the industries that have shown exceptional growth and fast-paced innovation, automotive industry definitely deserves a loud mention.

Not more than a decade ago, we never expected our cars to be a powerhouse of connectivity.

Thanks to the advancements in sensor technologies, robust in-vehicle networking, and smart automotive Electronic Control Units (ECUs), we are witnessing a new era of connected systems.

Information related to driver assistance, navigation, instrument cluster and access to phone calls/messaging are being delivered seamlessly to the driver.

All this data is delivered via different sources like CAN in-vehicle network, connected Sensors or through IP/GPS/Cloud connectivity

The need to display such critical data, provide ease of access and mitigate driver distraction led to the introduction of multi-display infotainment display. This is one system among the car’s components that has evolved very rapidly.

It all started with a modest FM radio on the dashboard and now the modern in-vehicle infotainment system is evolving into a seamless multi-display system.

Most traditional infotainment consoles have been positioned at the center of the dashboard. Displaying information on this console needs constant attention of the driver away from the on-road viewing area. This has raised a concern regarding driver distraction.

Traditionally all these display systems (Infotainment, Head-Up Display, Instrument Cluster) work in silos. They are powered by separate Automotive Control Units (aka ECU), have independently designed UI/UX, fetch data from respective sources and are very likely to be developed by separate automotive suppliers.

Welcome ‘Multi-display Infotainment system’, which is powered by a single Automotive ECU (single hardware) and has one central processing unit.

How Does a Multi-Display Infotainment display system Work?

The key components of a multi-display infotainment system:

The ones enlisted above are the basic building blocks of a multi-display infotainment solution. More tailor-made and an advanced solution may require additional hardware and software components.

We will now discuss the system details and see how these components interact with each other to provide information + entertainment (= infotainment) to the end-users.

Again, it must be pointed out that the kind of information shown on different infotainment displays may vary in different products designed by various automotive OEMs/Suppliers. 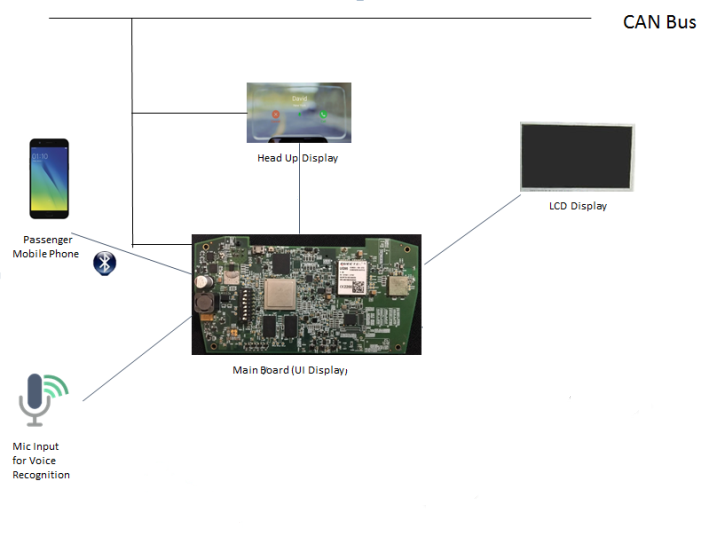 The Need for automotive ECU convergence

There is an array of sub-systems in the car that need to be responsive, interactive and secure, all at the same time. As a consequence, the new age cars have a gamut of electronic control units (ECUs).

The introduction of multiple infotainment displays in the vehicles is not only increasing the number of control units and is also making the entire system very complex.

Also, data is being collected not only from traditional sources like CAN in-vehicle network, but also from deployed sensors and IP connected external environment. Hence deploying just one display will not only make the entire UI very cluttered but will also impact the end-user experience.

This situation is akin to handling a double-edged sword; we are in need of a solution that delivers a distraction-free user experience and does away with complexity of too many E/E systems.

The answer is ECU convergence or consolidation– whatever you may like to call it. Now let’s dig a little deeper.

“It will be tough for the OEMs to fulfill consumer’s expectations, both in terms of cost and quality, if every new feature in the car would require new ECU to be added”

A Few Pointers that Highlight the Need for Automotive ECU Convergence:

Maintaining the accuracy of the content displayed on the screen

The amount of content that OEMs want to display on the screen is increasing quite rapidly. In such a scenario, the device drivers need to coordinate amongst them to pass on accurate info to the displays. It is good to manage the content from a central hardware to keep any anomaly at bay. Also, when a display is showing some safety-critical information, the latency issue also needs to be minimized.

A consolidated automotive ECU that can handle multiple displays is the need of the hour. Innovations in the chipset design and development is making it possible for one Electronic Control Unit to handle multiple functions.

Every time a new automotive ECU is added to support a new feature, it entails increased cost. Using different hardware platforms for the multiple displays results in a lot of overheads.

The procurement team has to coordinate with multiple suppliers. Also, every hardware needs to be validated and certified prior to deployment. Both time-to-market and cost increases as these processes involve series of testing and validation processes.

Vulnerability of the ECU system

Reports by Consultancy.uk suggest that by the year 2020, 80% of the new vehicle will be connected to the digital services. This raises serious security concerns.

When there is a single automotive ECU at play, securing it becomes easier and more cost-friendly.

Some people are of the view that a single ECU controlling multiple displays increased the vulnerability of the system. A successful breach into the central ECU will grant the entire access to the hacker.

Agreed! One cannot simply rule out this possibility and advocate fool-proof security of the single automotive ECU system. However, a consolidated ECU will localize the security issue to a single ECU.

Very strong security measures can be deployed to make it safe and secure. Also, the cost and time involved in securing the system will come down.

Get ready for a Multi-display Cockpit Experience in a Car

Multiple display system is now being embraced by many automotive OEMs worldwide. As ECU convergence gains pace, we can expect to see more cars and some even in the budget segment to come equipped with a multi-display infotainment system. The driving experience is definitely going to be very rich with such as system.