For our readers who would like to get introduced to the concept of Flash Bootloaders in Automotive, we would recommend you to read this blog- Understanding what is a Flash Bootloader and the Nuances of an Automotive ECU Reprogramming

When Automotive Electronics was in its nascent stage, software engineers had not fully utilized the capabilities of a Flash Bootloader software.

The Embedded Software Engineers, during Automotive Product Development, were more focused on the features and functions of the software.

The need for firmware or application update was not mission-critical, due to not-so-complex features and systems.

Fast-forward to the era of Connected Cars, Infotainment, ADAS and Telematics applications, and the need for frequent software updates can’t be understated. And who empowers these software updates? It is your modest Flash Bootloader Software!

The complexity of the automotive applications has also meant that one type of Flash Bootloader solution is not the best fit for all the business use-cases.

Chances of memory corruption and security threats has paved the way for development of flash bootloader solutions that differ based on their technology architecture, security measures and connectivity features.

Before we discuss these special types of flash Bootloader, let’s first establish their need in the context of changing automotive electronics landscape. Every scenario will be followed up by the type of Bootloader, which is designed to mitigate the mentioned challenge.

Why Use Different Types of Bootloaders? The Scenarios and the Solutions

Reprogramming of the Control Units Software can get tricky at times.

The software image (file that contains the updated version) may be large in size, or there may be a chance of flash drive corrupting the memory.  There is also a possibility that the communication channel may not be secure enough, to support the re-programming.

We will shed lights on all these scenarios and issues that required flash bootloaders to be developed specifically to address them. Let’s find out one scenario at a time!

Scenario 1: An Instance of Memory Corruption by the Flash Driver

The Flash Bootloader comprises of several device drivers and software modules for flashing the Automotive Control Unit. One of them is flash driver.

These drivers act as a liaison between the memory location and the external tool for ECU flashing.

Due to certain malfunctions, the flash drivers can corrupt the memory locations of the Flash Bootloader.

If such a scenario arises, the automotive control unit may not accept the updates or run into other troubles. After all, the Bootloader is the first module to run, when ignition is turned on.

One of the major reasons to consider this scenario while designing the Flash Bootloader is the need for compliance with ISO 26262 Standard for functional safety.

In order to comply with ASIL B and above, your automotive ECU Bootloader should be designed in a way that the issue of memory corruption is completely mitigated.

The solution for this issue is to ensure that your Flash Bootloader design doesn’t have an integrated Flash driver.

Instead, the flash driver is loaded inside the Flash Bootloader, only when the ECU reprogramming command is sent by the external flashing tool. 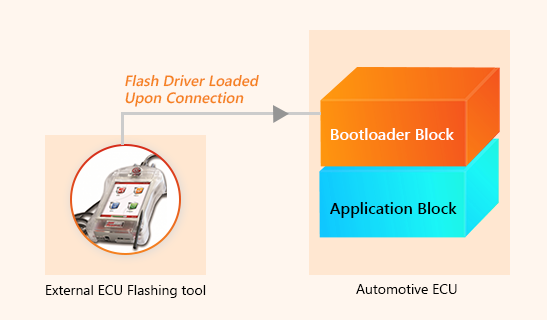 Bootloader with External Flash Driver
It implies that at every instance of the ECU flashing, these steps will follow:

In terms of ASIL compliance, this type of Bootloader can be seen as a safety mechanism put in place to avoid the hazards of memory corruption and the risks associated with it.

Interestingly, such mechanism does not lead to any substantial increase in the cost of the Bootloader.

Also, there isn’t any substantial increase in the Bootloader development time.

However, the factor that needs to be considered here is the compatibility of the microcontroller platform with the external flash driver. If certain Microcontroller does not support the flash driver, then your team may need to write some additional drivers.

The ECU flashing time, on the other hand, is rather improved. This is because the code that is usually executed from the flash memory (in a standard Bootloader), is now being triggered by the RAM, which is faster.

The external ECU flashing tool communicates with the Bootloader over CAN bus. Hence, it is highly likely that the communication can be hacked and the entire ECU be re-produced.

Some more serious security threats can be:

Not only the vehicle can malfunction due to this, but serious implications can follow and the reputation of the OEM may get adversely affected.

One of the most feasible way of mitigating such risk is to deploy security checks before the software update file is sent to the Bootloader.

Here, the idea is to encrypt the software update file before transmitting to the Bootloader via CAN. The encryption will be performed by the ECU flashing tool.

Once the Bootloader receives the encrypted file, the decryption algorithm will kick in. Post the decryption, the regular sequence of ECU flashing will be performed.

These bootloaders are based on Cryptographic algorithms. They serve the dual purpose of protecting the privacy of the firmware update file and verifying the code integrity. 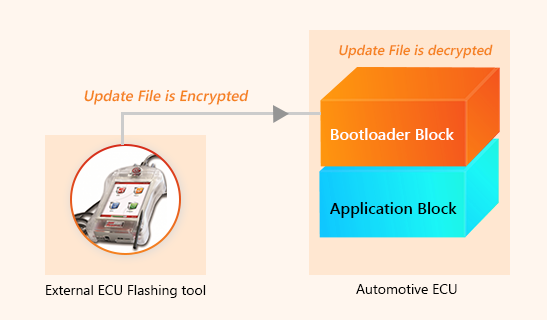 Crypto Bootloader
There is a 2-layer security measure deployed in the Bootloader for the purpose, which is explained as follows:

There may be a bug-fixes in the new release of the Bootloader Software or new features may have to be added. The Bootloader software block is tasked with the upgrade of the application block only and there is no provision for it to upgrade itself.

To enable such updates, we need Flash Bootloaders with a defined functionality that can update the Bootloader Application.

These specialized Bootloader solutions have a separate block for the purpose called the secondary block. The role of secondary Bootloader is limited to updating the Bootloader application. 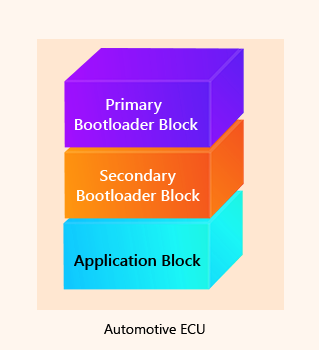 Following is the sequence of Flash Bootloader Application update:

There are more than several hundreds of ECU applications, which run inside the vehicle. Imagine taking the vehicle to the service station for updating all such applications. It will be a nightmare for the customers and even for the OEMs.

They will need to increase the number of service stations and also add more people to their workforce. So what’s the solution?

A Bootloader with the capability to receive firmware over the Ethernet. Such bootloaders are equipped with a FOTA module that receives, verifies and execute the update over the air. 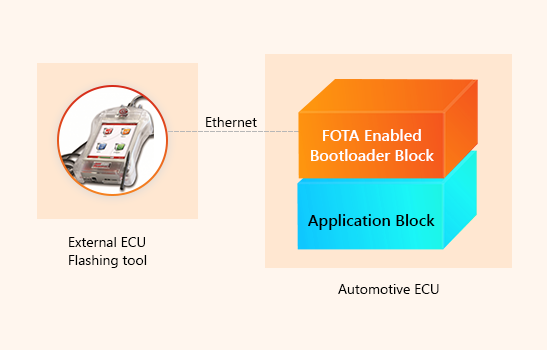 FOTA Enabled Bootloader
To learn more about how a FOTA Solution works, please refer to this blog “Understanding FOTA in the Times of ‘Connected Cars’

At ignition, the Bootloader checks the integrity of the control unit application using the Check-sum calculation and other methods.

If any discrepancy is found, the application is not run and the process is aborted. For critical applications such as Electronic Stability Program or ABS, failure of application execution can cause serious malfunctions.

A smart Bootloader can help to mitigate such critical issues. Let’s see how.

There is a golden or clone image of the application stored in the Bootloader, as an auxiliary application block.

Bootloader with Golden Image
If an issue is found in the existing application, the Bootloader shifts the control to the clone image of the software and the application need not be aborted. For critical applications, such Bootloader is a life-safer.

And Finally, the Standard Bootloader!

When such scenarios need not be taken into picture, our good old Flash Bootloader fits the bill easily. This standard Bootloader consists of the Bootloader Block and the Application Block.