Have You Met Android Treble: An Introduction and Analysis of its Benefits for the Automotive Industry

Have You Met Android Treble: An Introduction and Analysis of its Benefits for the Automotive Industry

With no intentions of starting a ‘War of Words’ between the fans of the two most popular Operating Systems, we have one simple question for our  community of Software Developers.

[Hint – think software and answer this!]

What’s that one big difference you find, while using an iOS based device vs Android  device?

Did someone say OS Updates?

While iOS users can conveniently update their OS (mainly because of the OEM support), Android users have been struggling with OS updates since eternity.

And a major chunk of the problem is attributed to the fact that OEMs cannot update Android OS, without first updating the hardware platform/components. So for an Android device to run the latest version, the hardware needs to be separately and necessarily upgraded.

The problem translates into an even bigger one when we analyse it in the context of Automotive Sector.

Upgrading hardware frequently isn’t a feasible option for the automotive industry. And since end users cannot update their version of Android beyond what their hardware allows, at one point, they’re forced to use an outdated software.

But things are about to change, thanks to Android Treble!

According to Techgeek, more than 98% of Android devices are running outdated software. And this also includes the devices/products from the automotive sector (like Infotainment Systems and other multimedia applications).

Fortunately, Google has decided to bridge the age-old gap of devices with outdated OS and the ones with latest versions with the launch of the  Project Treble.

Finally, OEMs’, Suppliers or End-Users will be able to update their devices with the latest Android version without having to upgrade their hardware.

Through this post, let’s try to find out all that we can about Android Treble.

What is Google’s Project Treble?

As already pointed out, OEMs cannot update hardware as easily and frequently as software updates roll out.

Before Android 8.x, the OS framework and hardware-level framework were parts of the same code.

So, whenever a new OS update was made available, to bring it into effect, the hardware-level framework also had to be updated necessarily.

But with the launch of Android 8.x, Google separated the two implementations, making it possible for Android OS to be updated without having to touch the hardware framework.

For a better understanding, consider this scenario. Your vehicle’s Android Infotainment System is tightly coupled with its hardware platform.

Let’s say it’s running on Android 7.x or an earlier version of Android (which would have been the latest OS version, when you purchased the vehicle/product). Now if an update needs to be pushed, low-level hardware drivers were also required to be updated along with the Android code. That in itself would be a mammoth task.

Now since the chip maker owns the code for these low-level hardware drivers, the Android update will have to wait until the chip maker updates its low-level code to make it compatible with the new Android OS.

With the release of Android 8.x and Project Treble, in particular, the hardware platform & associated device drivers have been abstracted and de-coupled from the OS code.

Therefore, the high-level software and OS can be freely updated to the latest version without having to wait for the chip maker to update its code. Thus theoretically, the entire update process is on the road to becoming much faster.

If you’ve grasped that, let us also give you a sneak-peek into the role of HIDL – an acronym for HAL Interface Definition Language.

The Role of HIDL in Android Treble

Before we dive into the nitty-gritties of HIDL, let us try to understand what an HAL is?  HAL, an acronym for Hardware Abstraction Layer forms an important software component of any Android Device.

Android’s software code communicates with the device’s underlying hardware through a hardware abstraction layer or HAL, and there are several HALs at work within an Android device. 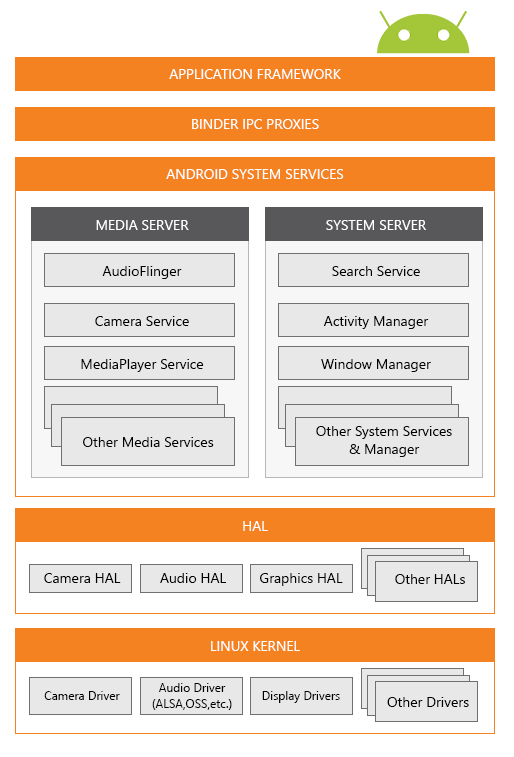 Now, naturally, with the release of a new Android update for versions 7.x and earlier, all HALs would need to be rebuilt as part of the hardware update, before the OS update would be applied. And that would further complicate the whole story and increase the waiting time.

HIDL is a layer on top of the multiple HALs, and acts as a common interface between application layer and device components.

Now, to update the Android OS, only an update of the HIDL would be needed to make things work instead of having to rebuild all the HALs. Simple and efficient!

How Will B2B Businesses Benefit from Android Project Treble?

With the launch of Android Treble, the Android OS will become more secure and standardized, since there will be no need of re-designing the hardware layers to implement an update. IT support costs will drop since no hardware update will be needed The Requirements will become simpler, leading to faster and wider Android adoption since the update-challenge will be eradicated, thus, benefitting the B2B enterprises.

Significance for the Automotive Industry

Probably, Automotive would be one of the industries to gain a  significantly positive impact  from the implementation of Android Project Treble.

This initiative by Google will make it possible for enterprises to roll-out OS updates for Infotainment Systems without having to consider the hardware limitations.

Not only will it make the whole update process faster, but it will also increase the consumer base by a large margin, since people will always have access to latest features and security mechanisms irrespective of the underlying hardware platform.

As a solution to overcome the OS update hurdles, Project Treble has all the necessary traits of a game-changer.

But implementing this solution as part of your Product Development Strategy would require extensive skills and in-depth understanding of the architecture of the Android OS (software layers as well as hardware intricacies).

For automotive OEMs, Suppliers and product companies, investing in the development of HIDL would be a wise decision in the long run.

There are two possible approaches to success – Either the skills to develop HIDL should be nurtured in-house or opportunities for a value-add partnership with a Product Engineering Services company, with necessary hardware & software skills, should be explored.

What is your take on Google’s Project Treble, does this sound like a value-add for your product development strategy? Let’s discuss – sales@embitel.com