Have the Investments in IoT Really Paid Off? : An Analysis of the IoT Business Index Report

Have the Investments in IoT Really Paid Off? : An Analysis of the IoT Business Index Report

The ‘Internet of Things’ is the new disruptive technology that is transforming the entire business world enabling them to explore new channels of revenue, improve customer experience and optimize the operational cost through technological innovations.

From manufacturing to healthcare to agriculture – IoT is everywhere, creating a connected ecosystem to find data-driven solutions to the real world problems.

IoT technology has already become a familiar term with more and more organizations across the industries adopting it as their core business model.

But it is also important to look back and check how successful these organizations have been in adapting to the technological transformation driven by IoT solutions, systems and processes.

In a bid to draw the real picture of how successful are various industries in embracing the IoT, the Economist Intelligence Unit has published a detailed report : ‘The Internet of Things Business Index 2017: Transformation in motion’, sponsored by ARM and IBM.

While at a broader level the statistics related to IoT adoption by various sectors looks promising, an in-depth analysis shows that the adoption has been not so uniform and falls short (at certain instances) from the anticipated results.

An Analysis of the IoT Business Index Report :

The report takes into account response from around 825 senior business leaders, from around the world and from different industries such as IT, healthcare, manufacturing, automotive, real estate, financial services – to name a few.

The report underlines the fact that the entire business world sees IoT as the key driver of the digital transformation in the coming times and believes that IoT technology is important for their success in the future.

But what makes IoT the future of business? As per the report survey, following are the main premises

In this context, the IoT Business Index report found out that:

Adoption of IoT Across the Industries: 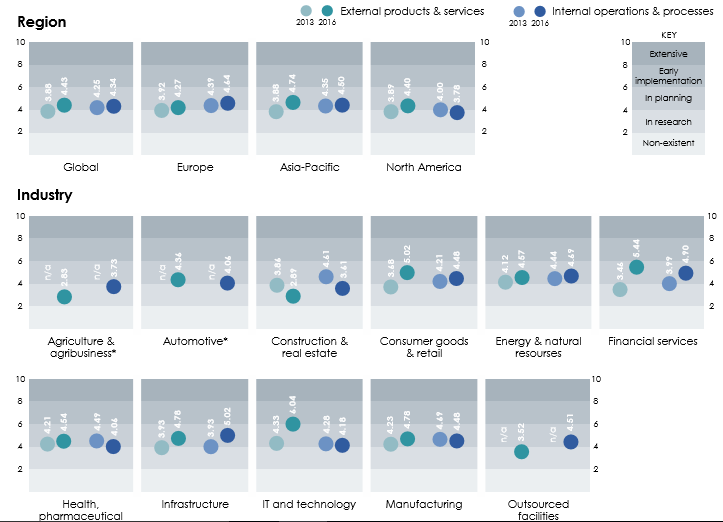 According to the IoT Business Index report, while IoT adoption across the industries and geographical regions have been positive , majority of the respondents of the survey felt that they were not able to achieve IoT development as good as they had expected.

Here are some interesting results from ‘Industry’ and ‘Region’ stand-point:

Top Challenges in Embracing IoT as a Business Model:

In spite of the overwhelming responses across the industries and verticals towards IoT implementation, there are considerable issues and organizational challenges that are keeping the business entities from achieving what they regard as ‘extensive’ implementation of IoT as a mass market tool.

The survey respondents feel that in order to understand and address these roadblocks, there is a need to: 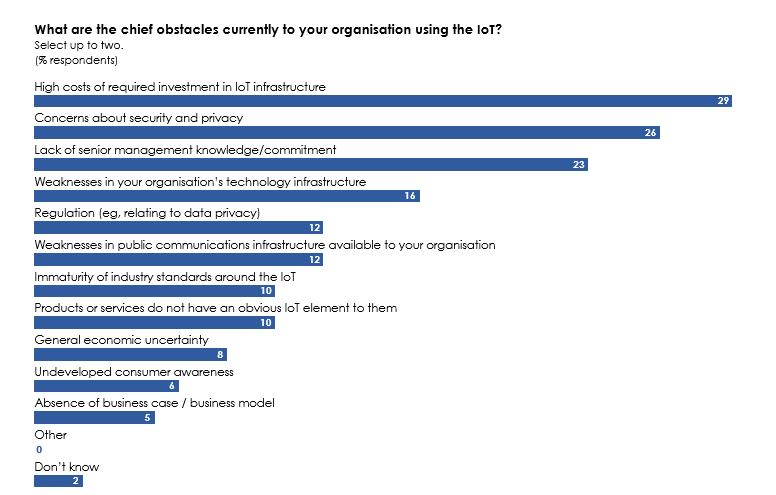 Probable solution: Data specialists are far more accustomed to working with structured data drawn from operational systems that fit neatly into the strict format of rows and columns offered by a relational database. One way to deal with this situation, according to the survey respondents, is to ensure that the organizations are capable of using advanced analytical algorithms while collecting data in time-series databases and event-stream processing platforms.

But What are ‘they’ Doing Towards IoT Adoptions:

Business organizations across the world are implementing continuous measures with the aim of using IoT extensively in their businesses. A significant number of organizations (35%) are learning from the experience of early adopters and chalking out their own strategy in accordance. Another 35% are already seeking advice from third-party consultants to implement the best IoT strategy.

One-third (33%) say they have already taken steps to train existing staff to work with the IoT, while 27% are either conducting or sponsoring research to analyze the overall market size and demand.

Some of the firms such as the German carmaker Daimler , with a sound IoT strategy in place, have managed to harness IoT’s potential to create new demand and deliver more futuristic business offerings. Daimler’s car2go service, a ‘free floating’ car sharing application that enables its users to use shared cars as and when needed, has used IoT to solve real world problems of traffic, parking space crunch, pollution etc.

Similarly, ISS, a Danish facilities management service, has been harnessing IoT functionalities to learn occupant behavior and usage of facilities using sensors embedded into the building structures, and helps their clients with relevant advisory services.

What is the Future of IoT?

While overall results around IoT implementation as a business tool have been rather dull, about 47% of the executives across the world still agree that the IoT will be one of the most important parts of their organization’s digital transformation strategy.

And this is where the planning and execution to build a long term IoT strategy has to happen that not only addresses the current organizational challenges but also makes it possible for any business, independent of  the region or  vertical it belongs to or size of its operations, to easily adopt IoT without getting bogged down.