While trying to understand an IoT solution, it is important to take note of one of its major components – Cloud Backend.

It has the responsibility of accepting tons of information from the IoT gateway, storing and processing it into actionable resources and sending them to the user interface (web app/mobile app/dashboard).

There is an inextricable link between IoT and Cloud. The data collected by the sensors is quite huge in the case of an industrial application of IoT and a gateway is not capable of processing and storing it. This data needs to be stored in a secure database and processed in an affordable and scalable way. This is where IoT cloud computing comes into the picture.

The cloud is connected to the IoT gateway through the internet and receives all the data fed to the gateway by the sensors. There are a few protocols that connect gateways to the IoT cloud applications and the most common among them is MQTT.

Sensors collect and feed data at all times, and this huge chunk of data after the aggregation and some pre-processing is transferred to the cloud for storage and processing. 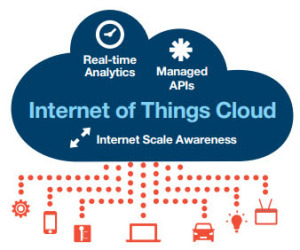 Depending on the nature of the IoT implementation the cloud may have varying degrees of complexity. In simple applications, the cloud may consist of a database that stores the data collected by the sensors, as well as the information of the users who possess the right to access/modify the data.In bigger and more complex implementations, the IoT cloud applications may also have the capability of machine learning, performing analytics, generating reports and more.

Cloud is where the real action takes place. IoT cloud application along with the APIs and other interfaces manage the data and commands to and from the sensors or the gateways. Different APIs need to be integrated so that the data is read and stored accurately.

Some of the protocols such as MQTT, Websocket, CoAP, and AMQP are used to develop a powerful and secure interface that facilitates seamless communication between the sensors and the cloud. In order to ensure that there is no data loss during heavy inflow of data, a robust database is designed as well.

The end users of the IoT infrastructure can be anywhere in the world and they need to be served round the clock, irrespective of their geographical locations and time zones. The IoT cloud architecture needs to be optimised so that this can be achieved.

IoT and cloud complement each other perfectly. While the former collects data and serves as a source of data, the latter acts as the destination as well as the distributor.

Benefits of Cloud in an IoT Ecosystem

IoT cloud application development is backed by some really advanced and proven technologies like Amazon EC2 in combination with EBS (Elastic Block Store). A few others are G Suite from Google, and Microsoft Azure.

With many IoT cloud application development companies joining the revolution, we can expect a lot of interesting IoT innovations over the next few years with cloud at their core.