As an Automotive Software or Hardware Engineer, in this era of Cars with Connectivity, Infotainment, Smart Features, you already have a first-hand experience of what drives an automobile (beyond the engine and the four wheels).

As automotive enthusiasts and one of the stakeholders of this industry, we all have interacted with the complex network of Electronic Control Units (ECU), that makes the modern-day vehicles, a powerhouse of smart features.

Automotive ECU is the component, designed by burning millions of lines of software codes into a hardware platform, that supports features to make the vehicle more fuel-efficient, smart, and functionally safe for the drivers and passengers.

A gamut of such automotive control units, such as ABS (Anti-braking System), Telematics, Transmission Control, Battery management systems and more, work in tandem to give end-users a great driving experience.

This communication is made possible by a robust in-vehicle networking.

Such coherent coordination between the various Automotive ECUs’ is made possible by the software modules that ensure a seamless inter-ECU communication.

And that brings us to the ISO 11898 based CAN protocol and everything associated with it. Sit tight as we explore the CAN protocol and CAN Software along with its layered technology architecture.

But first, let’s start with why a need was felt for an ECU communication protocol.

Why Automotive Industry needs a CAN Software Stack?

The various control units in an automotive, are part of a closed loop network, designed inside a car. In this system or network, it is imperative for all the ECUs’ to communicate with each other and take necessary actions.

For instance, a spark from the ignition system fires up the combustion chamber. For optimum power and fuel-efficiency, the time at which the ignition is initiated, by this closed loop system, is very critical.

To achieve this, the ignition system communicates with the engine control unit with the help of in-vehicle networking. This is how exact time of ignition initiation is calculated.

A more complex system that showcases the importance of communication between the control units is Transmission Control Module, in automatic cars.

The Transmission Control Unit changes the gear ratio with the changing speed. To ensure smooth gear shifts, information from Engine Control Unit and various other nodes are collected and processed.

While the need of communication is well established now. But to develop a deeper perspective, let’s take a stroll down the lanes of the history.

In the early 70’s when electronics system had surpassed the nascent stage of development, it started leaving an impact on the automotive industry as well.

The electronic devices inside a vehicle rose in number and their correlation also got complex. The different control units had communication signals to send to each other and point-to-point wiring was making the system clogged and hard to manage.

Moreover, the information exchange between the automotive ECUs had to be in real-time. All this led to the release of CAN bus system in 1986.

CAN Bus with attributes like faster data transfer, low cost, error diagnosis and more, was the ideal bus system that the control units required. The limitations of adding new features to the vehicle that emanated from complex dedicated wiring was mitigated by CAN protocol. See also this intro to CAN bus.

Delving Deeper into CAN Protocol Stack and its Layered Architecture

CAN protocol (as defined by ISO11898), is a well-defined framework, based on which all the Automotive OEMS’s and Suppliers design communication interface between the various control units. .

CAN Protocol defines, how the vehicle data like engine speed, vehicle speed, diagnostics information etc. should be shared between the ECUs.

Every control unit (known as a node of the network) that needs to communicate using CAN protocol is connected via a Serial BUS.

To enable the transmission and receiving of the data, there are certain hardware and software components embedded in these nodes.

Typically, for a CAN node to be able to transmit and receive messages, it needs to have following components:

The transceiver then transmits the messages over the CAN network. The CAN transceiver along with some other layers such as ISOTP and Bootloader, together comprise of a CAN Stack.

CAN protocol is based on the famous ISO- OSI reference model. There are seven layers through which every data packet passes, before it is transmitted or received.

This 7-layered structure is industry-accepted and widely adopted approach used in communication protocols.

The CAN protocol leverages two such lower layers; viz. the Physical and the Data link Layer.

When this protocol is packaged as a stack, few more modules are integrated, in order to make it suitable for the particular microcontroller platform.

Here is a snapshot of the CAN stack architecture to help you understand it better. 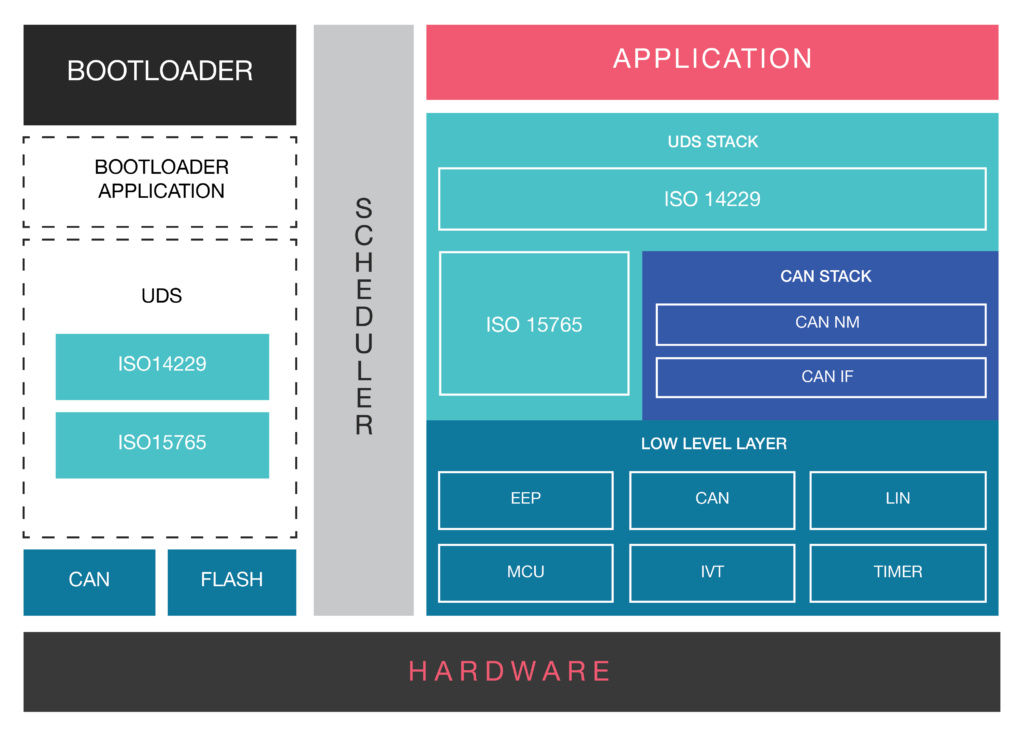 CAN Stack Architecture Diagram Showcasing Different Layers and Modules
Let’s talk about each of the modules one at a time.

CAN protocol has stood the test of time and has virtually replaced every other communication protocol used in the automotive industry.

Its robustness and data handling capabilities, has made CAN a widely used protocol in other industries including Railways, Aviation etc.

The inherent error handling capabilities also makes CAN, a protocol of choice for the majority of the automotive OEMs.