Standardization in the processes of operations, design and development methods is an absolute must in an industry as diverse as automotive.

Multiple stakeholders from tier-1 suppliers to technology providers lend their expertise in development of an automotive module. A jazzy infotainment system that you see in a car has OS from one vendor and communications handled by another. One aspect that binds each of the stakeholder is standardization. And similar to every module, ECU diagnostics also needs standardization.

Going back to the example of the infotainment system, whether it’s the operating system or the communication module, if there is one thing that is common to both is diagnostics. These modules will face compatibility issues if common diagnostics practices are not followed. This is where ODX comes as the perfect solution.

Based on XML, ODX provides a standard that describe diagnostic data in an OEM agnostic format. And not only does ODX describe the diagnostics data in a standardized manner, it also makes it super easy to exchange. Doesn’t it sound smooth and seamless?

What is ODX format?

The ODX format is standardized in ISO 22901 Standard and is an XML-based ASAM standard for describing ECU (electronic control unit) diagnostic data.

Whenever distributed teams are involved in projects, this standard becomes a good choice for exchanging relevant diagnostic information. This enables all the stakeholders to use the shared diagnostic data across geographies. 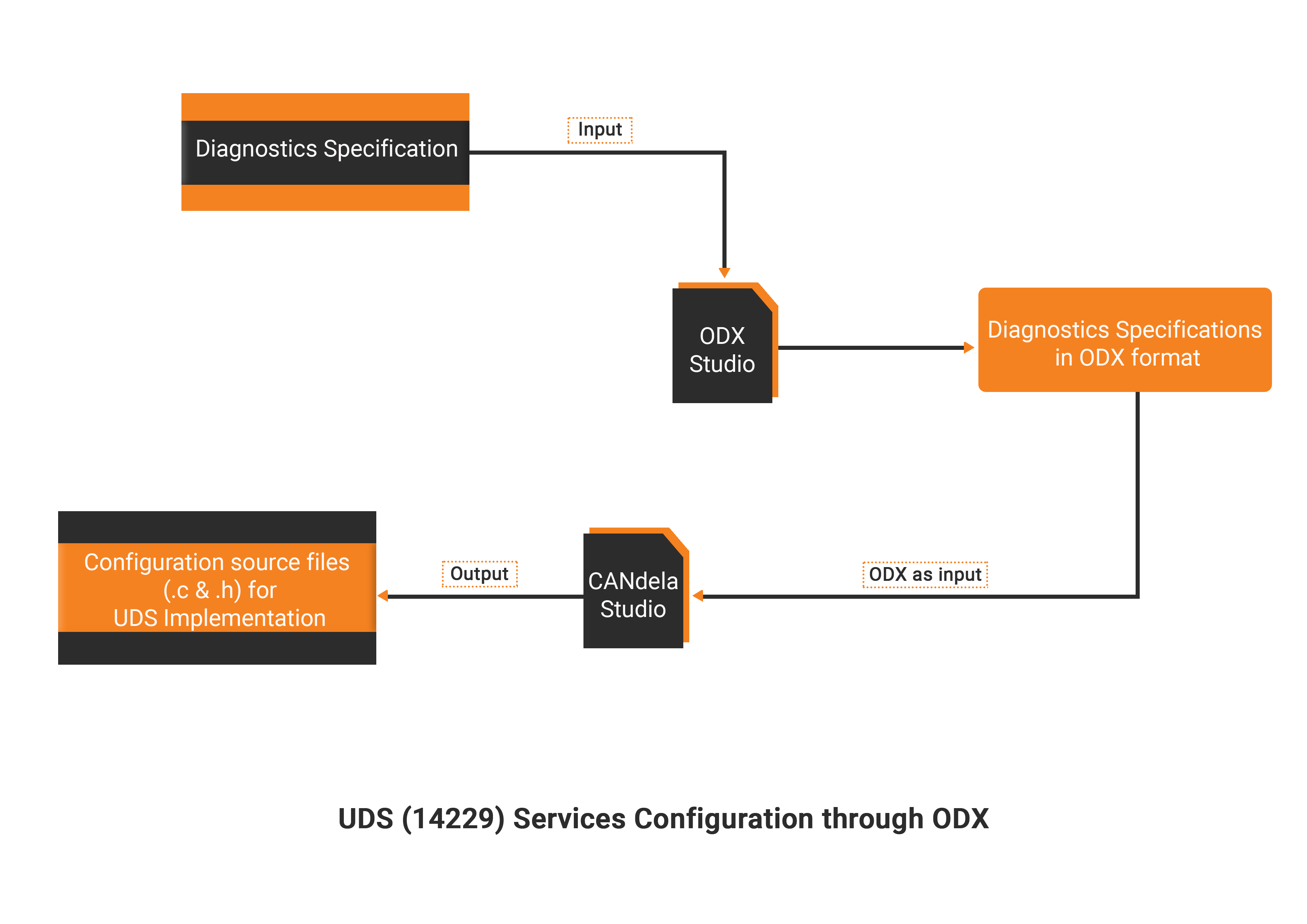 Understanding the Structure of the ODX Data Model

At the foundation of ODX lies a data model which is formally specified using UML class diagrams. Once specified, the data model is mapped to XML. This ODX data model is partitioned into four main areas:

The need for a standardized Diagnostic Specifications format

In the automotive sector, a Diagnostic Design Specification is a document which describes ‘how diagnostics will be implemented in the systems being developed by an organization’.

This is the reference vehicle diagnostics related document used at every stage of development, right from high-level design to system testing.

Traditionally, the diagnostic functions of early ECUs were straightaway implemented in the software and documented as part of the software documentation.

However, this trend has now changed, and diagnostic specifications are before the onset of product development.

Since the advanced electronics have increasingly made ECU a complex system, the need for automating this process of drafting diagnostics specifications was felt.

In addition to this, more often than not, OEMs’ relied on either basic document formats like DOCX, XLSX, PDF, or proprietary documentation formats to share diagnostic specifications with the software development teams.

This problem multiples further when distributed development groups within an OEM are involved or various suppliers/engineering providers are involved.

To better streamline the operations and also introduce automation, the need for a standardized approach was felt. This standardized would let the diagnostics specifications be automatically entered into the configuration tools of the ECU life-cycle. This need for standardization triggered the development of the ODX standard format (Open Diagnostics Exchange Format) which was formally released in December 2000.

How is ODX Generated?

The generation of ODX can be understood by looking at the first cross-OEM ODX project that was carried out between two leading vehicle manufacturers from 2003 to 2006. The CANdela tool chain was used in the project and it involved two vehicle models. The following procedure was followed:

This project was carried out using ODX version 2.0.1.

How ODX Aids in Configuration of UDS Services?

Manual configuration of UDS protocol services, diagnostics specifications (provided by the OEM) can be very time consuming and may suffer from the risk of manual errors.

With the advent of ODX, automated tools are also available, that facilitate the configuration of UDS protocol stack.

The diagnostic specifications are provided as input to the ODX tools to generate XML-based ODX files. These files then can be referred to during the development, testing, and validation phases.

Benefits of ODX for the Automotive Industry

Because of the uniformity it brings in the different phases of vehicle diagnostics configuration, OEMs, suppliers and technology providers observe a wide range of benefits

In order for the OEMs and the product engineering service teams to use ODX format with ease, there are several tools to choose from. Irrespective of how ODX format is implemented for vehicle diagnostics (UDS), it is going to bring in the much needed standardization among the automotive stakeholders. It is also likely to expedite the process of vehicle diagnostics configuration by automating it.