New age Automotive ECU applications are complex systems. An insane amount of information needs to be processed in real-time and rendered to various other systems. An ADAS system, for example, uses an advanced algorithm to processes data from the cameras, radars, GPS and other sensors to assist the drivers in avoiding judgement errors while driving. Such a data-heavy system has to be fool-proof and to ensure that, the testing must be rigorous and comprehensive.

Testing such complex systems on a real vehicle to prove every possible use-case is not a viable option. It incurs huge overheads and it is very challenging to test every scenario. Moreover, performing the tests at the final assembly entails test-related changes that can seriously impact the schedule as well as the cost. Also, the entire assembled platform might not be available for testing at the required time.

Simulation happens to be the only plausible approach to such testing and thus arrives Hardware-in-Loop testing methods. Not only does it automate the testing process but also brings in the tests much early in the software development lifecycle.

While we make it sound very easy to have HIL Testing unravel the software defects without an assembled product, a lot actually goes into the process.

Let’s begin by understanding HIL Testing at a high level, followed with a detailed analysis of the HIL Test system and the testing process.

In the simplest terms, HIL Testing is a method to validate a software in a simulated environment where ECU functions can be tested without having the actual vehicle system. HIL Testing is used to validate the communication, system integration and the functionality aspect of automotive software.

Ideally, an ECU under test receives huge number of I/O signals that represent different functionalities. A comprehensive test means that all these functionalities are tested under the scenarios based on the requirements. So, what exactly conspires during HIL tests?

During HIL Testing, the ECU is connected to a Test System that mimics an assembled product (an engine, a body control module or even the entire vehicle system). It interacts with the input and the output of the ECU under test, as if it were an actual vehicle.

Using a HIL Testing software, different test scenarios can be created, and the output validated. Depending on the software requirements, the test coverage can be expanded without worrying about the cost and physical risk to the system. 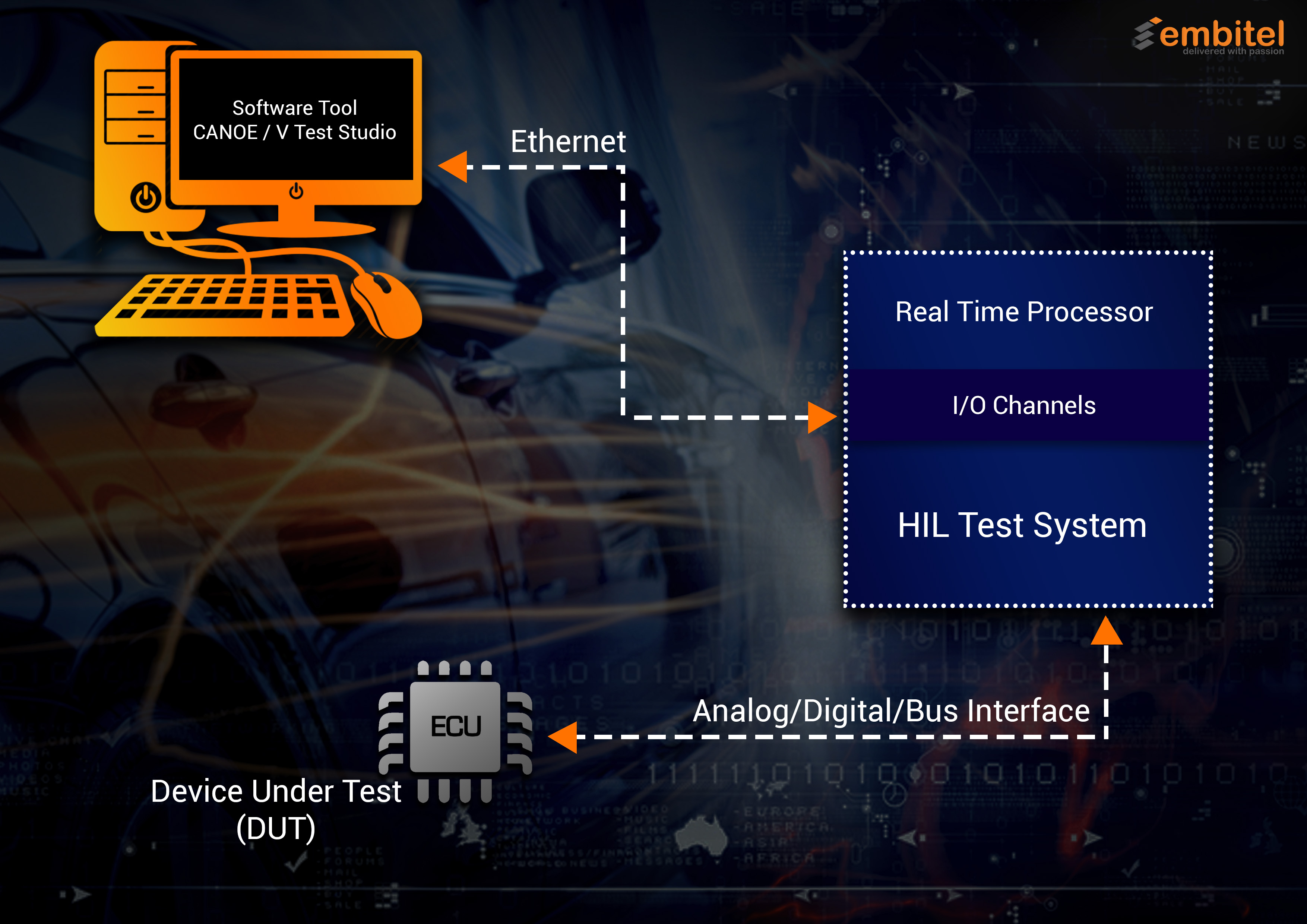 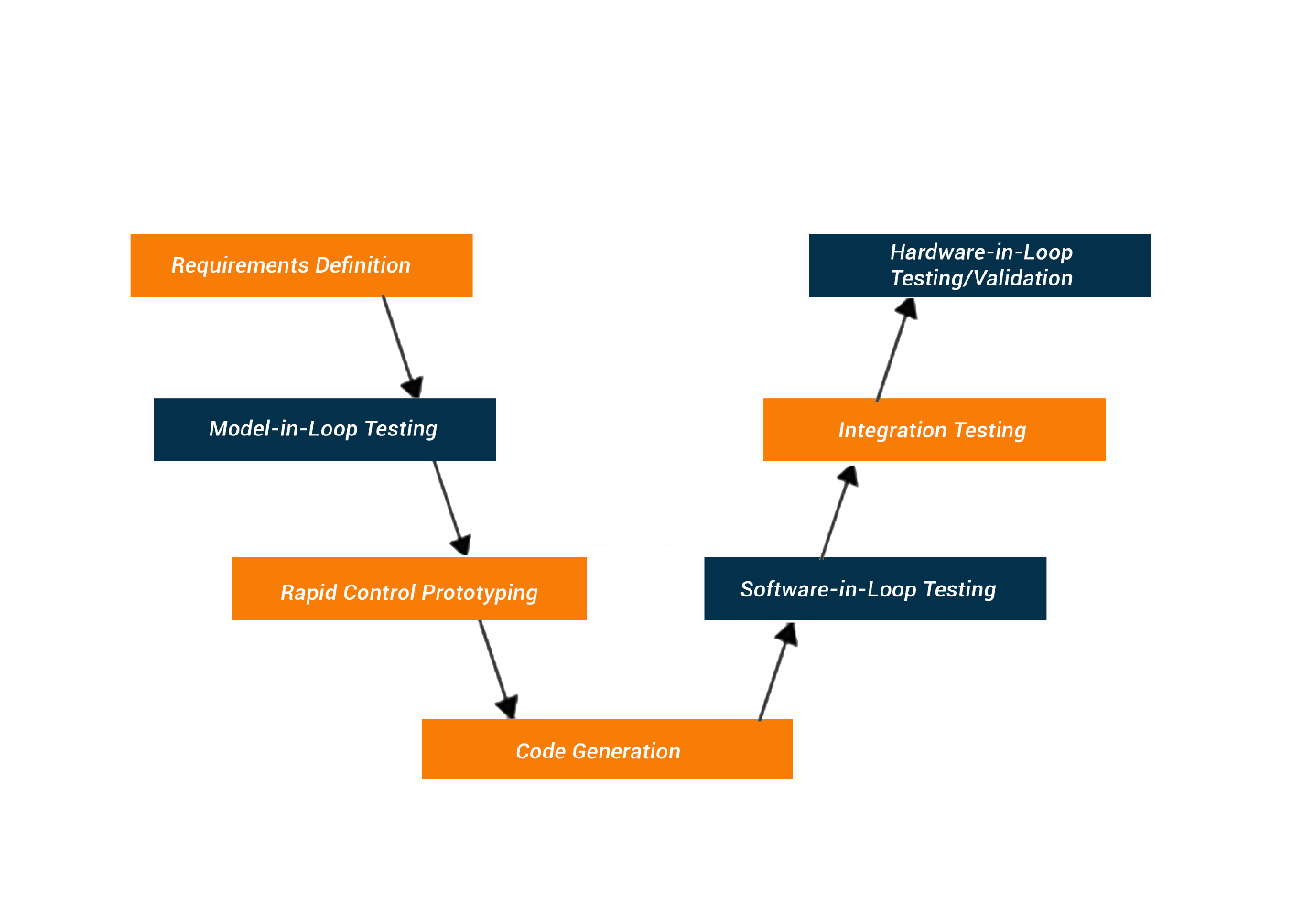 Unit testing and integration testing precede the stage where the software is ready to be validated keeping the target hardware in loop.

A HIL test system is at the heart of HIL testing. The simulation part of the testing that we mentioned earlier, needs an environment that can trick the ECU into believing that it is connected to a real vehicle.

The test system provides this environment. And for that purpose, it requires a gamut of software and hardware components. Let’s discuss them!

In addition to these, there are components that manage power supply by simulating the battery and other auxiliary modules like load boards.

Several vendors have their HIL Test Systems out in the market. In the context of architecture, application framework and concept, most HIL test systems are almost identical. The only difference that one can spot is that they cater to diverse industries. For instance, VT System from Vector is designed specifically for automotive application development. DSpace caters to power electronics industry as a whole.

We will now discuss some of the popular HIL Test Systems that are deployed in Hardware-in-Loop testing.

Generally, the motor controller ECUs need to be tested for

A HIL Test system simulates the power electronics, electric motor and the vehicle environment at the signal, electrical and mechanical levels.

And for this, the HIL Test system needs access to

The HIL Test System does the following tasks:

The Test Cases are written in software tools such as VTest Studio using scripts (CAPL, Python). The test reports are generated after the required tests are executed.

Hardware-in-Loop testing gives the automotive industry a chance to test their solutions before the actual target platform is ready. Not only does this ensure reduced time-to-market but also leads to a better and more technically matured product.

The probability of call-backs is reduced significantly when you have a thoroughly tested product in hand. Thanks to some great HIL Test Systems, automated HIL Testing is redefining the automotive industry and the future only looks brighter.