Why Cybersecurity Has Become Indispensable for Automotive Industry

Why Cybersecurity Has Become Indispensable for Automotive Industry

The moment a system is connected to a network, it becomes vulnerable to cyber-attack. The attack may or may not be a successful one, depending on how secure the network is.

We witness the news of website/email hacking or the hijacking of social media accounts umpteen times. Movies go a few steps further to showcase how a full-blown cyber-attack on a government installation would look like. That might look like a bit of exaggeration but theoretically, such attacks are possible.

Now, that automobiles have also joined the digital bandwagon, the security threat has become real for them too. For example, a connected car is akin to a computer on a network with exposed interfaces such as steering, braking and other vital information about the occupants. A hacker can interfere with the vehicle systems or steal sensitive data if he gets access to the vehicle.

This might seem far-fetched but there have been such incidences in the past that corroborate such claims. Moreover, some researchers have performed such cyber-attacks on infotainment and other systems to bring out their vulnerability to cyber-attacks.

However, automotive OEMs and other entities in the automotive value-chain do realize these threats. The introduction of a cybersecurity standard ISO-SAE DIS 21434 is also helping in making cybersecurity a part of the software and hardware development lifecycle.

We will learn about all these aspects in the subsequent sections of the blog. Read on..

Why is Automotive Cybersecurity Such a Big Deal?

Automobiles have transitioned from being wheels driven by an engine to a sort of data center on wheels. A modern-day car with some advanced features can have 150 ECUs with more than 100 million lines of source code. The cyber risk to a modern vehicle increases with every line of code burnt on the automotive ECUs. Hence, each line of code must conform to the measures stipulated in the cybersecurity standards.

Moreover, the threat is not just limited to the vehicle itself but also transcends to the back-end and 3rd party services. A good example of an attack on such services is controlling a home EV charging installation by accessing the home Wi-Fi.

When we bring connected and autonomous vehicles into the picture, the threat can take a more hazardous form.

We have summarized some findings from last year’s cyber-attack incidences:

Every new feature or functionality added to a vehicle system adds to the risk of cyber-attack. In order to mitigate them, we must first understand the threats and where they emanate from. Let’s learn a bit about that too!

Automotive industry has been innovating at an unprecedented pace and most of it is driven by software. And we have already discussed how each line of code in the software increases the vulnerability. According to Mckinsey reports, the software and E/E component market is expected to grow from USD 238 billion in 2020 to USD 469 billion over the next 10 years. Let’s understand the cyber threat that emanates from these innovations: 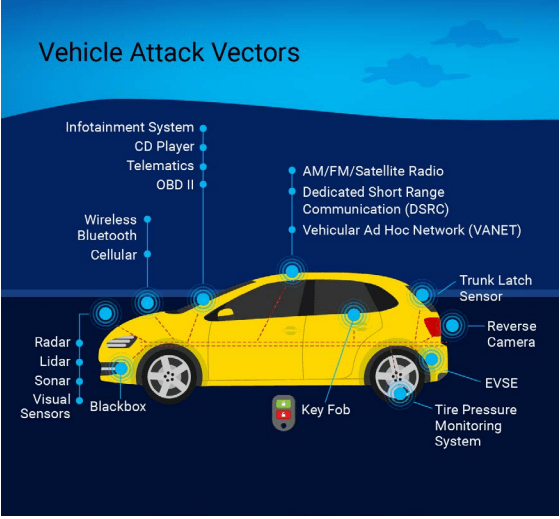 Different components of a vehicle are developed by multiple entities viz, OEM, Tier-1 supplier, After-market vendors, Technology solution providers and others. These components need to be developed keeping in mind the cybersecurity aspect. Hence, the approach has to be uniform across the automotive value-chain.

Following are some of the stakeholders and their role in ensuring automotive cyber-security:

Understanding the Types of Cyber-attacks on Vehicles

Over the years, cyber-attacks have evolved and so have their prevention methods. However, in order to keep vehicles safe from these threats, it’s imperative that cybersecurity measures are always in place. And to ensure that, we must first understand the kind of threats that can affect a vehicle.

Denial of Service (DOS): It is an attack that overwhelms an automotive system to make it unresponsive to requests. For example, a DOS attack on the ABS ECU can disable the braking system of the vehicle. A DOS attack does not give the hacker access to the system, but it can surely be used for malicious intentions such as injuring a vehicle occupant.

Man-in-the-middle (MitM) attack: When a hacker inserts himself between the client and the server, it is called a MitM attack. In such an attack, the attacker can spoof the client and steal data from the server.

Command injection data corruption: By injecting a specialized command, the attackers can gain a write access to an ECU and corrupt the data stored in the ECU. Depending on how critical the ECU is, such attacks can wreak havoc on a vehicle system.

There are many such types of attacks possible. Once the attackers are aware of the vulnerability, they can choose the mode of attack.

As mentioned earlier, cybersecurity measures must be followed across the development lifecycle (security by design) of an automotive component. On top of that, there are certain best practices that aid in achieving cybersecurity in the entire automotive ecosystem. Let’s discuss a few of them.

Discussion on automotive cybersecurity is incomplete without the mention of ISO/SAE DIS 21434 standard. Similar to ISO 26262 in structure and scope, this standard covers the cybersecurity engineering aspects for road vehicles.

The standard was first published in the year 2016 by the joint effort of ISO and SAE. The aim of this standard is to provide guidelines on how to manage automotive cybersecurity, similar to how ISO 26262 standard manages the Functional Safety for road vehicles.

Cybersecurity is now a priority for automotive OEMs and other stakeholders, and rightly so. It is also seen as one of the quality aspects of a vehicle, given the fact that automobiles are more connected than they ever were. It will be interesting to see how the industry addresses the pain points related to cybersecurity in the coming years.